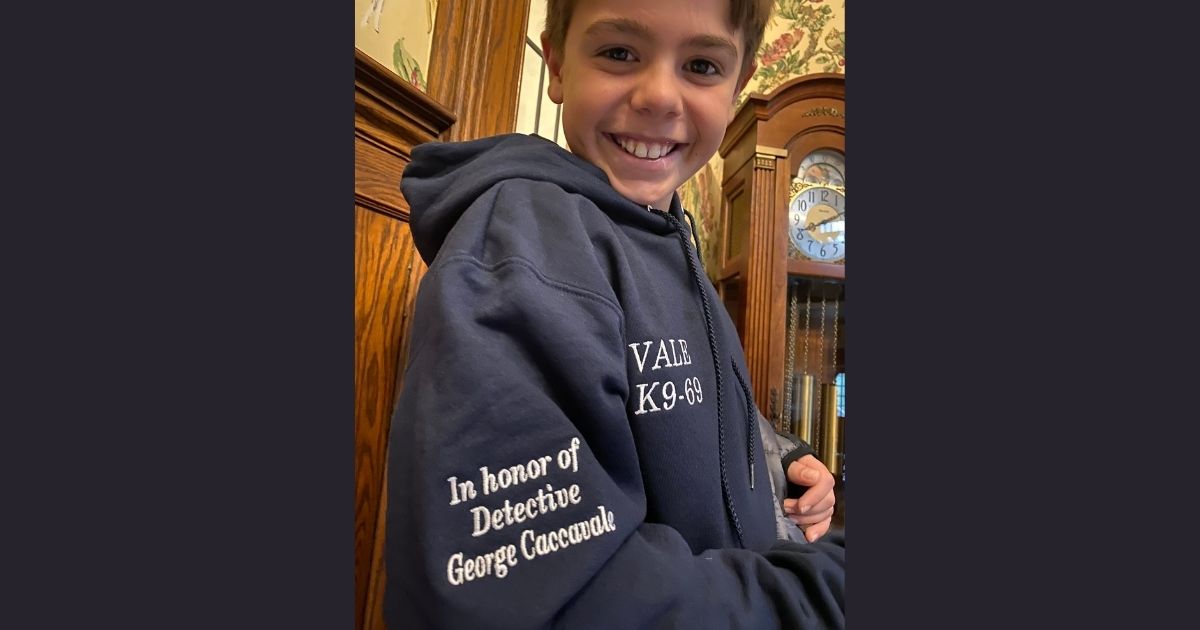 For staffers of New York’s Pelham Union Free School District, if you want to wear a sweatshirt honoring police officers killed in the line of duty, you’re out of luck.

If you want to show support for the Marxist Black Lives Matter movement, which is actively in favor of defunding the police, then feel free to show support.

Carla Caccavale, 44, is actively campaigning against Pelham school officials for banning her sweatshirts which were designed over a year ago to honor the memory of her father and other fallen police officers.

The sweatshirts have various patches, including one of a thin blue line flag, a popular pro-police symbol which was deemed by Dr. Cheryl Champ, the district superintendent, to be “threatening in nature.”

We want @SenatorBiaggi to explain to our family why she supports Elder Parole (S2144). Paulie never met his hero grandfather and bills like this would help free the creeps who killed him. Never mention my Father in your campaign video again. pic.twitter.com/FWLdMG9jfR

“The staff was allowed to wear one and not the other, and now it’s hard for me to explain to my children, who are used to seeing the staff wear it on Friday, why a sweatshirt honoring their grandfather is no longer allowed,” Caccavale told “Fox & Friends” on Tuesday.

Caccavale’s father, Transit Police Detective George Caccavale, was gunned down in the line of duty back in 1976, according to the Daily News.

The design of the sweatshirts was inspired by the NYPD’s decision last year to name one of its K-9 dogs Vale in honor of the late detective.

Caccavale was also selling the shirts to raise money for various police charities in her father’s memory.

More than a half-dozen Pelham school officials purchased the sweatshirts, and none were offended by the thin blue line patch, Caccavale told the Daily News.

However, circumstances quickly changed late last month when Champ sent out an email to school staff banning employees from wearing the sweatshirts or any other article of clothing displaying the thin blue line symbol.

“I recognize that in these heightened political times, these decisions, which were made on a case-by-case basis, have become intertwined and perceived by some to reflect a political leaning on behalf of myself and the district,” the superintendent wrote in a follow-up email on Nov. 3, according to the Daily News.

Although Champ claimed the decision was merely “perceived” to be politically motivated, no such ban was ever made on staff wearing Black Lives Matter gear, a movement that actively advocates for the defunding of police departments along with various left-wing Marxist equity policies.

Should faculty members at public schools be allowed to wear pro-police clothing?

“Like many symbols whose meaning has been co-opted over time, the thin blue line flag has increasingly been perceived by students to be threatening in nature, causing them to feel unsafe within our schools,” Champ continued.

In addition to the email, multiple staff members were called in and reportedly told the thin blue line was a symbol of white supremacy, according to Fox News.

“The issue is still that a blue line flag is not political,” Caccavale said, according to the Daily News.

“It just isn’t. It’s too late. This was never about politics. It was about honoring my father.”

Caccavale was not the only one to take offense to Champ’s email.

Paul DiGiacomo, president of the NYPD’s Detectives’ Endowment Association, sent a letter to Champ lambasting her decision and the rhetoric she used to describe the sweatshirts as well as the thin blue line symbol.

“We are in receipt of, and are absolutely outraged by, your letters outlining your decision to ban any graphic or logo that honors the profession of policing or memorializes members of the service who have been killed in the line of duty. These are personal and deeply felt family memorials that you’ve somehow turned into ‘threatening political speech,’” DiGiacomo wrote.

“At the same time, you’ve decided that the 1960s symbol of ‘Black Power’ fist is not political, and that listing the names of people who died during the commission of a crime, being questioned by police, or while resisting arrest isn’t political, either, and are permissible to wear.”

Additionally, DiGiacomo noted that the school superintendent’s claim of the police flag being seen as “threatening in nature” was “shocking.”

Overall, he saw the thought process behind Champ’s decision-making as “patronizing, ridiculous, demeaning, degrading, offensive, and flat out absurd.”

On Thursday, following the backlash, Champ sent out another email regarding her decisions, admitting “they did not evenly support our ideals of political neutrality,” and further banned all articles of clothing that could be considered political or support “social movements such as those represented in our schools last week on T-shirts and masks.”

That’s the dirty little secret of today’s left: they don’t believe in a free exchange of ideas.

Instead, according to them, if you disagree with left-wing politics, you’re a fascist.

If you don’t support Black Lives Matter and it’s incredibly erroneous narrative about police violence, then they believe you don’t care about black people.

And now, if you show support for the police by wearing a pro-police sweatshirt, they’ll call you a white supremacist.