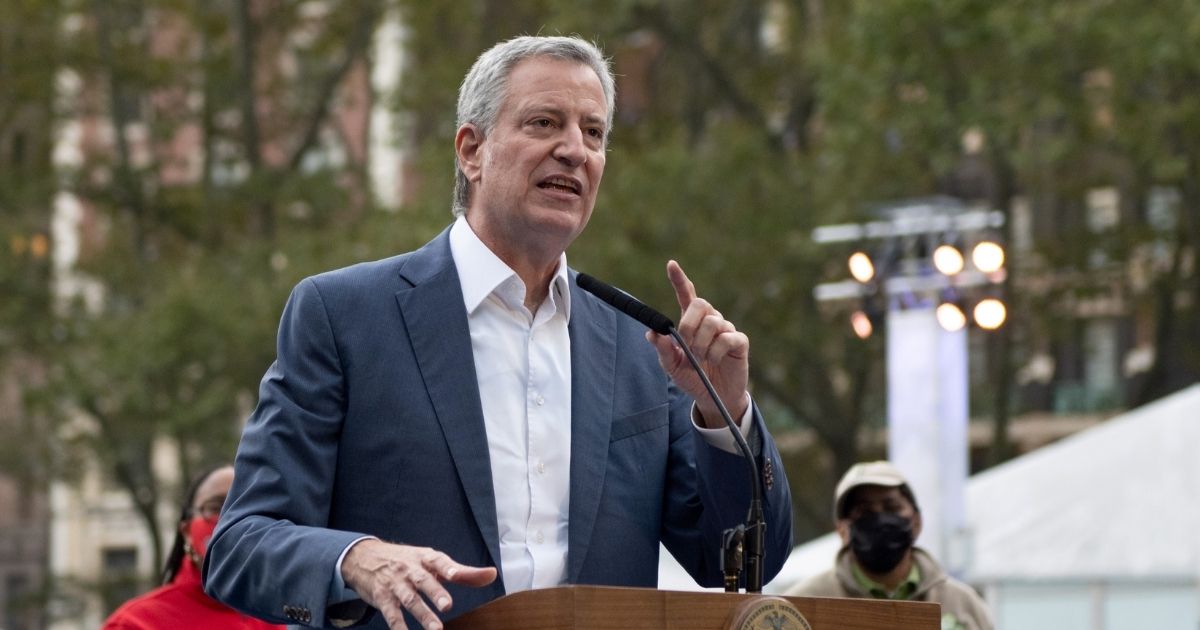 Democratic New York City Mayor Bill de Blasio said on Friday that his goal for his fledgling city’s public school system is to “redistribute wealth” in a bizarre speech touting the benefits of socialism.

At a media briefing, the Democrat spoke of his plans for New York’s young and most impressionable citizens. According to de Blasio, who can quote “The Communist Manifesto” from heart, the goal of public education for children is to promote institutional socialism.

The city reopened schools for in-person learning on Friday, Gothamist reported. Per de Blasio, the system must be rebuilt from the ground up with diversity in mind.

“We can never accept a broken status quo. We can never go back to a past that didn’t work. COVID, the COVID era has taught us that so clearly, and we need to do better and we will. And that means a commitment to fighting disparities and inequality in the life of New York City and that certainly takes us to education,” he stated.

“We need to profoundly change the distribution of resources. I’d like to say very bluntly: Our mission is to redistribute wealth,” de Blasio later said.

“A lot of people bristle at that phrase. That is in fact the phrase we need to use,” he added.

DE BLASIO: “I’d like to say very bluntly: our mission is to redistribute wealth.” pic.twitter.com/bX6KaEKuWg

The mayor of the country’s largest city advocating for socialism should shock us all. Sadly, de Blasio is no longer capable of being provocative. The man who will perhaps go down as the worst mayor in New York’s history simply is who he is at this point.

He represents a larger problem, though, in that he was able to get elected twice by the city’s voters. Many of those voters might be feeling buyer’s remorse, as they are now hurting perhaps more than anyone in the country in the ninth month of the coronavirus pandemic.

Their elected officials have prevented an economic comeback through prolonged lockdowns. Businesses have closed permanently as de Blasio has prioritized turning the city into a pilot program for how not to govern.

Back in July, during a weekly radio interview with WNYC, host Brian Lehrer asked de Blasio about speculation that he holds his city’s business community with contempt. The Democrat responded by quoting communist literature.

“There’s an underlying truth in the fact that my focus has not been on the business community and the elites,” de Blasio responded. “Bluntly, my predecessor certainly focused that way … I think this is a profound problem … I am tempted to borrow a quote from Karl Marx here.”

“There’s a famous quote that ‘the state is the executive committee of the bourgeoisie,’ and I use it openly to say, ‘No,’” de Blasio told WNYC. “I actually read that when I was a young person, I said, ‘Well, that’s not the way it’s supposed to be … The business community matters … but the city government represents the people.”

It’s safe to assume through the Democrat’s actions this year that he takes those words to heart. He and Democratic New York Gov. Andrew Cuomo have made doing business a crime in some instances while simultaneously keeping children at home from school, which in many cases also keeps parents grounded. The result is that wealthy New Yorkers have fled the city to escape the totalitarianism, while many of those who remain behind are in worse shape than ever.

The New York Post reported that as many as 300,000 people have left the Big Apple since the beginning of the coronavirus pandemic. According to the paper, rising crime, school closures and economic uncertainty are driving people away.

Do you think New York City will ever recover from de Blasio’s leadership?

“The biggest reason for people leaving the city is uncertainty about when the pandemic will be over and how quickly the New York economy will recover,” Kathryn Wylde, the head of the Partnership for New York City, told the Post.

“More than half a million city residents who were employed in the retail, restaurant, services sectors have lost their jobs and cannot afford city rents. The late decision on reopening public and private schools forced many families to relocate so they could make enrollment deadlines in districts where they were living during the pandemic,” Wylde added.

As for the city’s school system, if that wasn’t broken before, it most certainly will be now.

In his final year as mayor, de Blasio wants to embrace socialism to make that system more equitable, which hasn’t worked out so well across the rest of the city. The only problem is that soon there might not be any wealth left for New York City’s Democrats to redistribute.