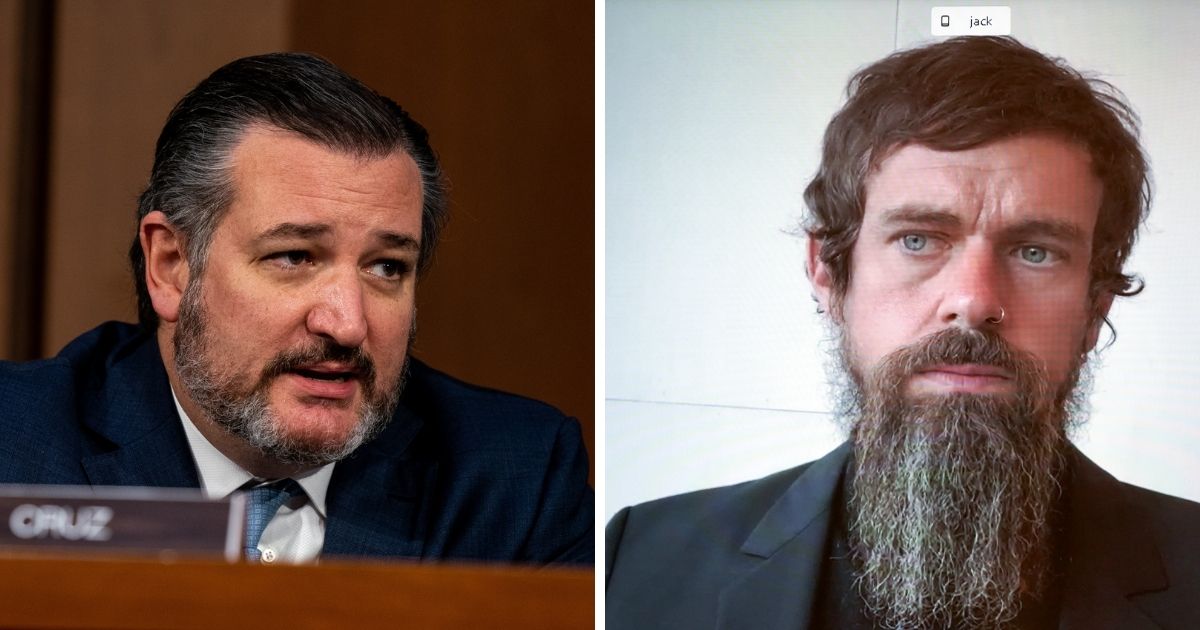 Sen. Ted Cruz wasn’t buying what Jack Dorsey was selling — and neither should the rest of America.

The Twitter CEO’s testimony before the Senate Judiciary Committee on Tuesday included a welter of evasions and half-truths over his company’s role as an information censor that would have made a Democrat blush.

But the Texas Republican wasn’t letting it go by.

In a statement before questioning Dorsey, Cruz noted that Twitter and fellow Big Tech giants Facebook and Google have “massive power” over the information Americans receive, and he pointed out the infamous role of Twitter in particular in squelching distribution of the story of Democratic presidential nominee Joe Biden’s son and his crooked, money-grifting ways.

Dorsey admitted the company was “wrong” to block the story — an admission that came two weeks to the day after voters who were largely ignorant of the story (thanks to the mainstream media) had already gone to the polls.

But Cruz has a larger point to make than Dorsey & Co.’s abysmal ethics.

.@tedcruz calls out Twitter CEO Jack Dorsey: “your polices are applied in a partisan and selective manner”
pic.twitter.com/6Mz2piAB6K

In the course of questioning that explored a federal government policy that releases tech giants from liability for the information that appears on their platforms — known as “Section 230” of the 1996 Communications Decency Act — Cruz leaned hard on Dorsey about how much influence his company has over the content that it allows.

Do you think Congress should crack down on Big Tech companies?

And the answer, as the senator made clear, is quite a bit more than Twitter and the others admit to — or should be allowed while keeping their immunity from liability.

“I understand you have the star chamber power,” Cruz said, as Dorsey struggled to make his company look like it was behaving honestly during that shameful episode. “Your answer is always, ‘Once we’ve silenced you, we can choose to allow you to speak.’ But you are engaged in a publishing decision.”

If Twitter wants to act as a publisher in the manner of newspapers or other publications, using its platform to push preferred policies (like, say, the deeply dishonest New York Times) it’s more than welcome to do so, Cruz said.

But Dorsey is childishly refusing to acknowledge what any sentient human being knows Twitter did in the run-up to the Nov. 3 election: The platform’s politics played a direct role in the information American voters saw and heard that could have affected their decision — and might have even swung the election to Biden.

They do it to Citizens voices…That is an attack on Individual Rights.

Big tech is big brother with profiling as well as Collusion – censorship, restraint of trade…. hope our do nothing law makers act responsibly

Cruz then switched to election fraud, a topic Twitter made a point of using to tag posts by President Donald Trump and other critics as somehow incomplete or lacking information.

When Dorsey tried to dodge — “I don’t know for certain,” he said — Cruz went to town.

Check it out here:

Senator @tedcruz Questioning Twitter CEO Jack Dorsey About Voter Fraud@SenTedCruz reads two statements and asks Mr. Dorsey whether they would flag them. Mr. Dorsey says they would likely flag them. The statements both come from the Carter-Baker Commission on election reform. pic.twitter.com/VGL8a9LR4U

The frustration of Trump supporters on seeing an exchange like this is obvious.

It’s beyond insulting to have Dorsey sit stone-faced in front of a committee of the Senate and claim his company’s inclusion of warning labels on tweets about voter fraud was “simply linking to a broader conversation so that people have more information.”

What happened in the election of 2020 was about the worst combination of liberal totalitarian tendencies combined with the power of 21st-century communication technology.

But even with the powers of Big Tech, the cultural arbiters in Hollywood and the hopelessly, depressingly dishonest mainstream media, Trump’s re-election effort won the support of more than 72 million American voters.

No matter how this still-disputed election turns out, it’s obvious it was not the repudiation of the Trump administration that liberals and the mainstream media have spent four years trying to build.

In fact, the president’s party gained seats in the House of Representatives and is holding onto its Senate majority pending the outcome of two runoff elections in Georgia in January.

And no matter what the final result is, the shadow of doubt about the legitimacy of Democratic nominee Joe Biden’s results is never going to go away.

Legally questionable court decisions in Democratic states before the election and flipped votes and suspicious software after (again in Democratic states) are putting a pall over the Biden campaign that’s going to be harder to shake than the “Russia collusion.”

These are matters of fact, not fevered speculation on MSNBC. The collusion narrative, meanwhile, was already regarded as nonsense by the sane part of the population before it was blown apart by the long-awaited Muller report 2019.

The Biden voting results, on the other hand, are the product of dishonesty, if not from faulty voting machines and crooked elections officials then definitely from the high-handed arrogance of the Lords of Big Tech – very much including the CEO of Twitter, the billionaire genius who doesn’t seem to know if a living, breathing reality like voter fraud exists.

Dorsey can sit as stone-faced as he likes, but his lies won’t sound any less feeble.

Ted Cruz wasn’t buying it on Tuesday. And neither should the rest of America.