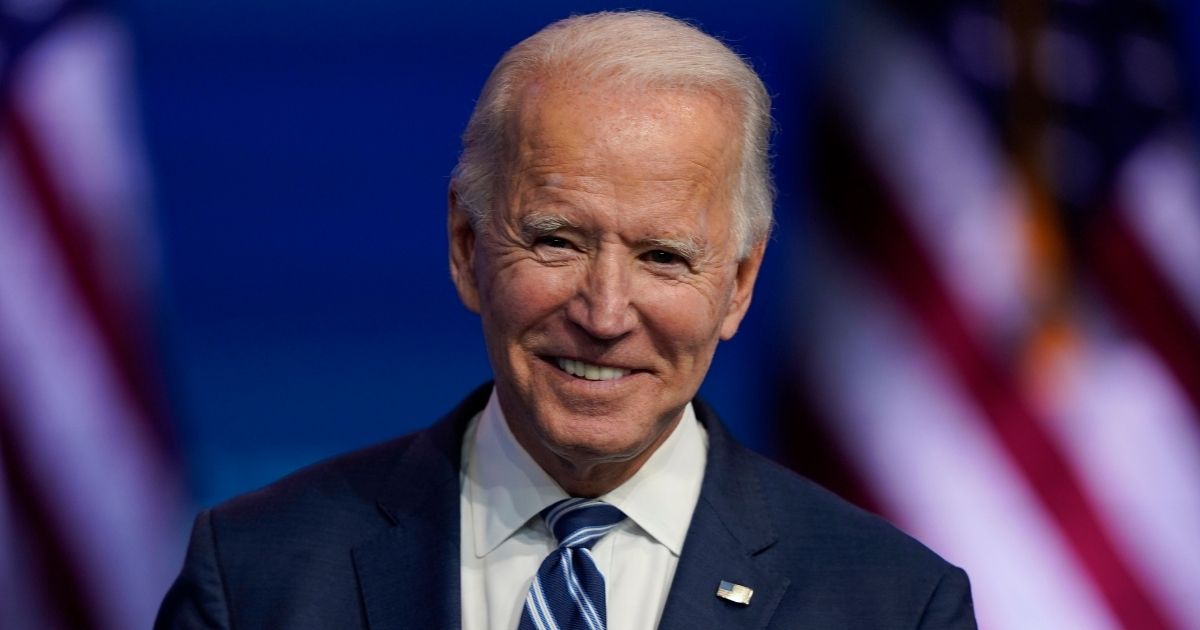 According to an analysis by the Media Research Center, that number has been bolstered since Election Day with almost three dozen tweets censored in some way, shape or form.

Most of the censored communications, it also won’t surprise you to learn, involve the election and the validity of the results.

“This same treatment was also handed to the Trump campaign Twitter account. Since Nov. 3, Trump’s personal Twitter account was censored 35 times as he tweeted about ballots and election counts. Overall, Twitter has censored Trump since May 31, 2018, a grand total of 111 times. In contrast, Biden and his campaign have received no forms of censorship or suppression.”

Now, you could tell me it’s because Joe Biden (or likely a highly remunerated social media expert who can carefully deploy neutral language that sounds almost strong enough to resemble something worth reading) tweets amorphous, anodyne stuff like this:

That’s ol’ “no malarkey” Joe, telling like it is — whatever he’s telling us.

Is Big Tech biased against Republicans?

Both Twitter and Facebook, meanwhile — and Twitter in particular — have made it their holy mission to crack down on anything that potentially questions the legitimacy of mail-in voting or the results it produced.

Some of this stuff goes further than others, it’s worth noting, and perhaps a flag or two on some of the more controversial ones would pass with a bit of grumbling about the state of Silicon Valley.

However, some of the flags came on clips like this from Fox News’ “The Next Revolution With Steve Hilton”:

RELATED: Poll: Without Big Tech Censorship, Trump Could Be Winning with 289 Electoral Votes

It’s just Tammy Bruce, a Fox News contributor and Washington Times columnist saying this: “There’s always some kind of fraud, that’s unavoidable. But when you’re dealing with the most vulnerable voting dynamic, which are the mail-in ballots, that’s the biggest issue. And now with it being about 50 percent of what came in, we have to be able to deal with the nature of the legitimacy of this and if it can be legitimate.”

Here’s Texas GOP Sen. Ted Cruz talking about software issues in Michigan and how “[t]he legal process is how you resolve those questions.”

The Media Research Center makes the facts on this one pretty clear: “[A]ccording to 2012 research done by the Pew Center on the States, 1.8 million deceased people were registered as voters. This topic has been discussed broadly by both sides in the past 10 years.”

And if you’re retweeted by Trump, you could be in trouble, as well.

BREAKING: Sources on the ground say Stacey Abrams has been involved in the monitoring of mail-in ballot and absentee ballot counting in Fulton County where some 11,200 votes remain uncounted in George race where Trump holds lead

This is reason enough to go to court. No honest person can look at this and say it’s normal and unconcerning. https://t.co/CguBRGCRLD

These errors only seem to ever happen in one direction. 👇 https://t.co/tUxxxTbUJd

There’s journalist Paul Sperry and pundits Matt Walsh and Dan Bongino. Retweeted by Trump — and all with some censorship on them.

In the three days following Election Day, Forbes reported Friday, half of Trump’s tweets were censored — 11 out of 22.

An MRC study finds that 4.6% of Joe Biden voters would NOT have voted for him had they known about the Biden family’s corrupt business dealings. https://t.co/X8NCCHVKui

It probably won’t surprise you that Big Tech bias played a huge role in the election. In fact, the Media Research Center indicated that the suppression could have cost Trump the race, with an estimate of 289 electoral votes for the president if the Hunter Biden laptop story hadn’t been suppressed.

We’ll never know whether or not that’s true, but what’s clear is that Big Tech plans on putting its thumb on the electoral scales every few years.

What they want is nice, pleasant, pliant Republicans who are indistinguishable from Democrats policy-wise, except for the fact they hem and haw and don’t quite give in so easily. Say what you will about President Trump, he fights — and that’s exactly what they don’t want from the GOP.

Of course. Biden would never question the legitimacy of Trump’s 2016 election. That’s what he has his surrogates for.

And when his opponents do the same thing, Biden also has his surrogates in Big Tech to shut them up. It’s what the kids like to call a win-win situation.