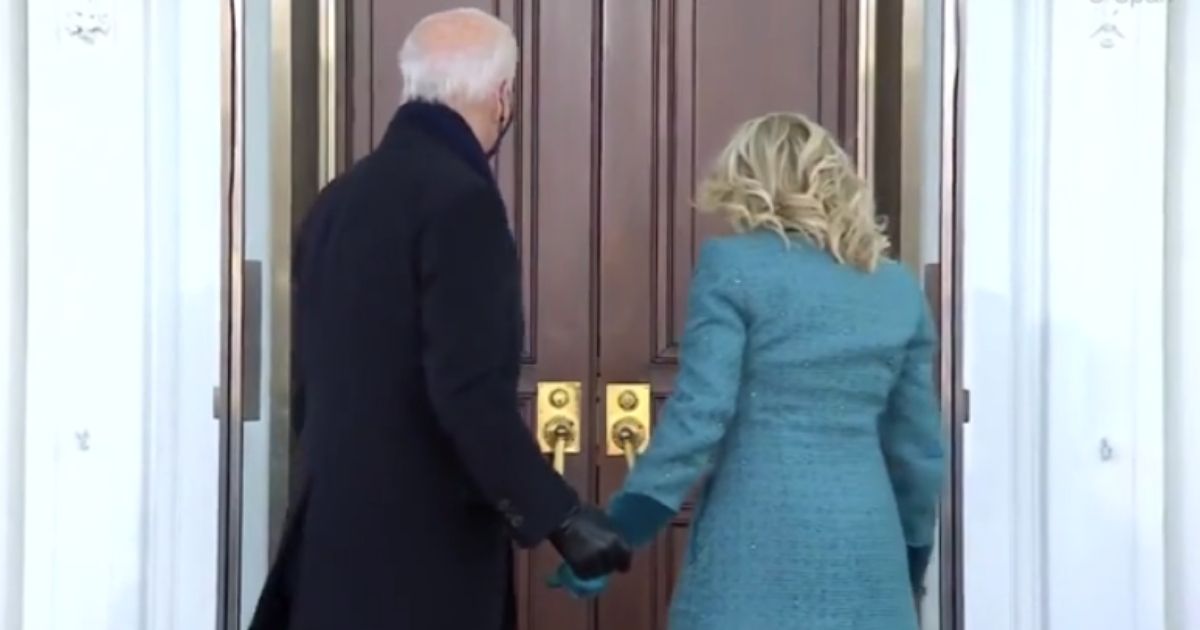 President Joe Biden and first lady Jill Biden were awkwardly left out of the White House on Wednesday without anyone to let them inside, according to reports.

The Daily Mail reported that hours after Biden’s inauguration, the Bidens and their entourage of family and friends made their way to their new home — a building vacated earlier that morning by then-President Donald Trump and his own family.

Video shows the pair standing for a few moments as “Hail to the Chief” was playing. On the video shared by the Daily Mail, it appears as though they were waiting for the door to magically open for them for about 10 seconds.

In fact, you’d expect an eager person to be on the other side of that door waiting for a well-choreographed door pull, as inaugurations generally leave no detail overlooked.

The door finally did open, but the strange moment went viral.

“There was a protocol breach when the front doors were not held open for the first family as they arrived at the North Portico,” Lea Berman, the former White House social secretary for President George W. Bush, told The New York Times.

Meanwhile, former long-serving White House curator Betty Monkman told the paper, “The delay in opening the door did puzzle me a bit.”

Do you think Biden will be a successful president?

The oddity stands to reason.

According to the Daily Mail, perhaps the Bidens had expected a White House support staffer to be there to let them in. The only problem was, they had reportedly just fired at least one of them in White House chief usher Timothy Harleth.

The Daily Mail said a former senior Trump administration official told the outlet “that the firing came at the request of the Bidens.”

“The head usher enjoyed the confidence of the Trump family throughout his tenure. Any suggestion that his resignation was at the direction of anyone other than the Biden team is false,” the official said.

CNN also reported that Biden fired Harleth, while noting that a “Biden White House official confirmed Harleth’s departure, but added, ‘he was let go before the Bidens arrived’ at the White House.”

Harleth had worked as the rooms manager at the Trump International Hotel in Washington prior to being hired on at the White House. He had apparently shown a great work ethic there.

Harleth was reportedly hand-picked for the job by former first lady Melania Trump, according to The Times. Shortly after the Trumps were gone, so was Harleth on Wednesday.

Maybe Biden was looking for a fresh staffing start, or perhaps the new president was being petty, but Harleth told The New York Times that he was arranging furniture for the new president and first lady when he was abruptly fired at around 11:30 a.m.

The man took the high road when commenting on his termination in a statement to The Times.

“It has been an honor to serve as chief usher, a position whose loyalty is not to a specific president, but rather to the institution of the presidency,” Harleth said. “I am proud that I had the opportunity to lead the residence staff to receive the incoming first family with the utmost respect and dignity, not just for this administration, but for the future success of the office of the president.”

If the Daily Mail and CNN reports are correct, Biden apparently took the low road, and it may have cost him a smooth transition from the frigid temperatures outside and into the White House itself. It could only be described as poetic justice.

Not much else has been going smoothly for Biden following the door fiasco.

Since Biden’s inauguration on Wednesday, he’s lost the support of three labor unions, reportedly angered the Canadians by shutting down the Keystone XL pipeline and been forced to apologize after the National Guard troops who came to town to help him and Democrats with their show-of-muscle photo were relegated to resting in a parking garage.

I Struggle Between Laughing and Crying that Trump, CPAC Are Mainstream of GOP