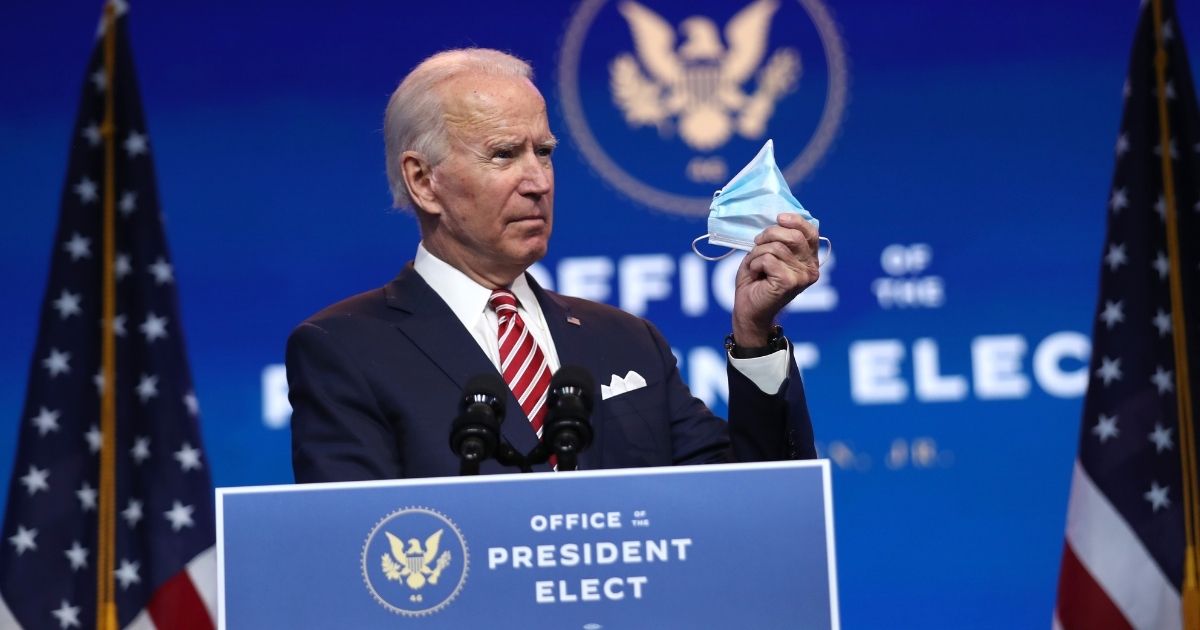 However, it was one reporter’s question about whether more governors should impose additional commerce-killing lockdowns and mask mandates that revealed something about the former vice president’s take on COVID-19 all along.

“You know every major individual of any consequence in the health field is saying we can save we can save 100,000 lives just between now and January 21 by wearing these masks,” Biden said, citing the date for the presidential inauguration.

“It’s going to take a while for the vaccine to be able to be available and distributed and get to people,” Biden continued, speaking about the coronavirus vaccine that was developed in record time with news of the success released a week after the 2020 presidential election.

He then, seconds later, claimed it was “totally irresponsible” to “resist” mask mandates, and that doing so was making a “political statement.”

“Does anyone understand why a governor would turn this into a political statement?” he asked, holding up a face mask.

So Biden picked the oddly specific date of his own potential inauguration to project the number of lives that could be saved by such “patriotic” measures that trample on personal freedom while pretending it all isn’t somehow political?

Do you think Democrats will claim the virus is gone if Biden takes office?

During the height of the pandemic, it was heresy to even question whether any of the drastic measures taken to prevent the spread of coronavirus could be tainted by politics.

Even as lockdowns continued preventing people from eating at restaurants or going to church, the throngs of angry people flooding city streets to riot after the death of George Floyd while in Minneapolis police custody were permitted to assemble at will.

As the presidential election season ramped up, the Biden/Harris campaign had little to run on except hanging all coronavirus deaths on Trump, even as world leaders across the globe also failed to get a handle on the virus.

With his accomplices in the establishment media, Biden didn’t have to answer questions about his son Hunter Biden’s crooked dealings or even talk about his own presidential agenda — just wall-to-wall COVID-19.

“Donald Trump knew that COVID-19 was dangerous. He knew it was deadly. And he purposely downplayed it,” Biden tweeted Sept. 9. “Now, nearly 200,000 Americans are dead. It’s unconscionable.”

Donald Trump knew that COVID-19 was dangerous. He knew it was deadly. And he purposely downplayed it.

This lie was repeated even after Democratic governors sang Trump’s praises for giving their states everything they needed during the pandemic.

The vaccine they said would never be possible — certainly not in a matter of months — has already been developed by at least two major drug companies, thanks to Trump’s “Operation Warp Speed” program.

Yet Biden is still acting like he’s stumping for a presidential bid he most likely already won by proposing the same insane measures that were deemed necessary at the beginning of the pandemic when little was known and treatments and vaccines were yet to be discovered.

Still, even as data showing their limited efficacy has rolled in, fresh restrictions have continued to roll out ratcheting up the unscientific and tyrannical mandates in Democratic-run places like Pennsylvania, while Michigan and California are closing their indoor dining just in time for the holidays, The New York Times reported.

Biden will likely attempt to swoop in and demonstrate how he expertly “shut down the virus” in an attempt to claim credit for Trump’s success (watch for the same as the economy rebounds when he’s able to unleash the Trump economy once he takes over as well).

Judging by how Biden used his inauguration as a yardstick, it’s hard for anyone to deny what those on the right have suspected all along: COVID-19 is real, but the left has used the pandemic for its own political purposes.