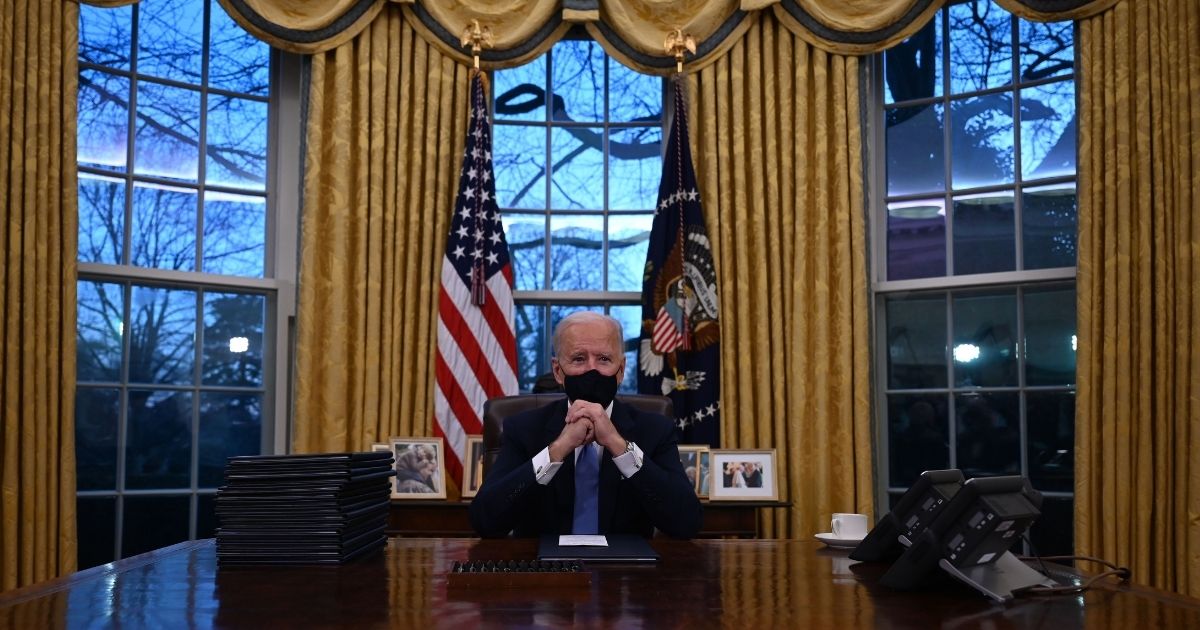 President Joe Biden has redecorated the Oval Office and removed military flags and the portrait of Andrew Jackson that had been displayed in former President Donald Trump’s office.

The Washington Post reported that flags from the different branches of the military were previously displayed behind the Resolute Desk.

They have been replaced with an American flag and a flag with a presidential seal.

A quick redesign of the Oval Office for President Biden:

– Busts of MLK and RFK flank a fireplace in the office.
– Large portrait of FDR
– Paintings of Jefferson and Hamilton
– Clinton’s draps and blue rug @AnnieLinskey with the details:https://t.co/ipK3g5OtDZ pic.twitter.com/1NzNhFHWyE

The portrait of Jackson, the seventh U.S. president, had been selected by former White House chief strategist Steve Bannon, who was influenced by historian Walter Russell Mead’s writings about the “Jacksonian” tradition in American foreign policy, Politico reported in 2018.

Trump and Jackson both ran as populists and Trump even visited Jackson’s Tennessee home after his inauguration, which led to a public outcry that Trump saw Jackson as a role model.

The Post reported that Jackson had kept slaves and signed the Indian Removal Act, which forced Native Americans to relocate and led to approximately 4,000 Cherokees dying on what has become known as the Trail of Tears.

The portrait of Jackson was widely criticized after it served as a backdrop for Trump honoring Navajo code talkers in November 2017.

Are you surprised by this redesign?

Mead, however, felt that in order to understand Trump’s presidency, people needed to first understand Jackson.

“The Steve Bannon side of the Trump presidency remains very Jacksonian. Bannon isn’t in the White House, and he’s not welcome I think, but his influence is still felt,” Mead told Politico.

“Trump’s base remains Jacksonian. And Trump knows how to play to this base,” the historian continued.

“So even as Trump has kind of adjusted in some ways to the necessities of the Washington establishment and, you know, ‘Well, you can’t just completely reinvent American foreign policy,’ he continues to orient in this way.”

The Post reported that Biden has also removed a bust of Winston Churchill that had been reinstalled during Trump’s administration.

Biden did keep the gold drapes that had hung in his predecessor’s office — as well as former President Bill Clinton’s office — and the Resolute Desk that has been used by many past presidents.

Biden’s Oval Office centers around a portrait of former President Franklin D. Roosevelt, who helped the country through crises during the Great Depression.

There are also paired paintings of former President Thomas Jefferson and former Treasury Secretary Alexander Hamilton, who were known for their frequent disagreements.

The paintings were hung together as “hallmarks of how differences of opinion, expressed within the guardrails of the Republic, are essential to democracy,” Biden’s office told The Post.

Other notable additions to the office include busts of Rev. Martin Luther King Jr., Robert F. Kennedy and Cesar Chavez.

“This Oval is an Oval for Day One,” Deputy Director of Oval Office Operations Ashley Williams said.

“It was important for President Biden to walk into an Oval that looked like America and started to show the landscape of who he is going to be as president.”