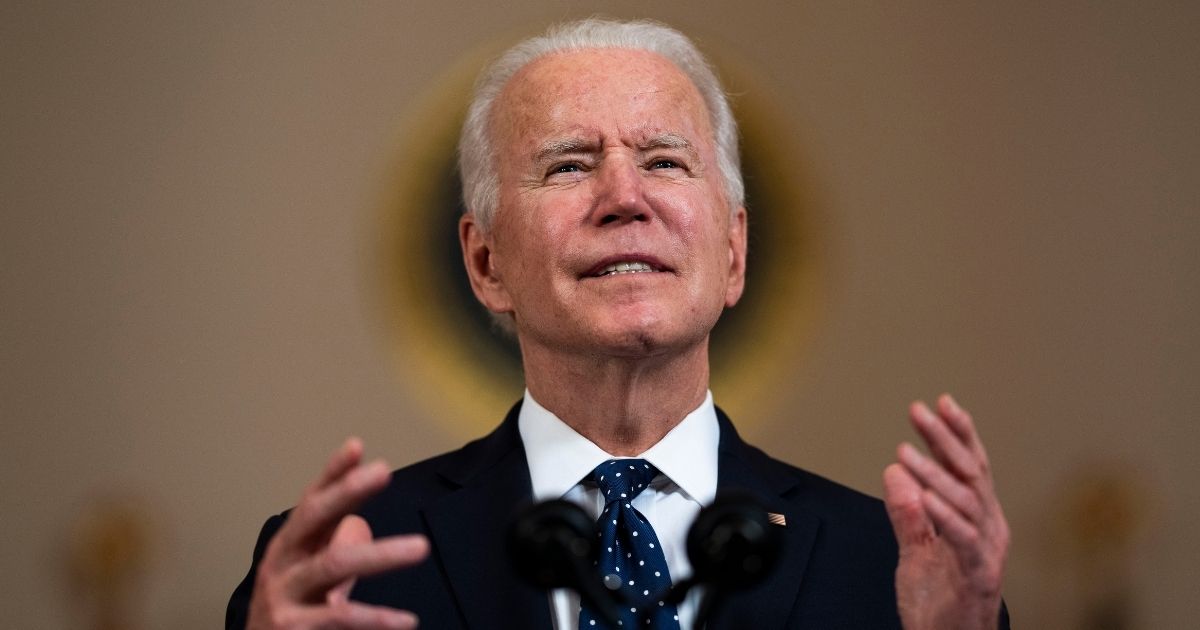 President Joe Biden used Derek Chauvin’s guilty conviction Tuesday to, ironically, once again chastise the United States for being systemically racist down to its very “soul.”

Enough of the president painting America and its people as racist when it simply is not true.

Biden claimed the killing of George Floyd “ripped the blinders off for the whole world to see the systemic racism … that is a stain our nation’s soul; the knee on the neck of justice for black Americans; the profound fear and trauma, the pain, the exhaustion that black and brown Americans experience every single day,” according to an official White House transcript of his remarks.

Did he watch the trial? Chauvin was convicted of three crimes, none related to race.

Prosecutors charged the former police officer with no hate crime, so apparently the evidence was not there to support such a conviction.

Biden’s repeated and hyperbolic accusations of systemic racism, including during his inaugural address, call to mind the famous observation in Shakespeare’s “Hamlet”: He “doth protest too much, methinks.”

Biden seems to be projecting perhaps his own issues and history on all of America.

This country, the most diverse in the world, has time and time again taken action to live up to its highest ideals as expressed in the Declaration of Independence, “that all men are created equal, that they are endowed by their Creator with certain unalienable rights, that among these are Life, Liberty and the pursuit of Happiness.”

Do you believe America is systemically racist?

The United States is actually the opposite of systemically racist, guaranteeing under its Constitution and legislation like the Civil Rights Act of 1964 that all races are treated equally under the law. There are both criminal and civil liabilities when this does not happen.

In his Tuesday remarks, Biden said, “The battle for the soul of this nation has been a constant push and pull for more than 240 years — a tug of war between the American ideal that we’re all created equal and the harsh reality that racism has long torn us apart.”

More times than not it’s been the Democratic Party, and sometimes Biden himself, who have tried to pull the country away from its ideals.

“Joe Biden now is hooked on this phrase now, Jim Crow. And I got to thinking about this. There’s really nobody better, who’s alive in Washington, D.C., who can talk about Jim Crow than Joe Biden. Why? Because Joe Biden was part of Jim Crow,” Levin said.

“Joe Biden is the most racist president in the Oval Office since Woodrow Wilson.”

In the early 1900s, the Democrat Wilson rolled back gains made by black Americans under Republican administrations by resegregating multiple agencies in the federal government and praised the Confederacy and the Ku Klux Klan in a history textbook he wrote prior to coming to office, according to History.com.

Levin pointed to Biden’s opposition in the 1970s to school integration through busing as evidence of the 46th president’s racism.

He highlighted a speech the then-Delaware senator made from the Senate floor in July 1977 regarding school integration in which he said, “Unless we do something about this … my children are going to grow up in a jungle, the jungle being a racial jungle with tensions having built so high that it is going to explode at some point. We’ve got to make some move on this.”

“Biden helped his fellow liberals reconcile themselves to the wrong side of history by recasting integrationists as the real racists,” the columnist wrote.

The lawmaker bowed to the opposition his white constituents in Delaware had to busing, Levitz recounted.

So the American system — its courts and laws — had determined that school integration through busing was required, but Biden, like Democrats before him, sought to thwart the system.

So the system wasn’t racist; he was.

Democrats have a long history of seeking to prevent America from living up to its highest ideals.

During and in the years immediately following the Civil War, the Republican-led Congress passed three key constitutional amendments freeing the slaves, guaranteeing them equal protection under the law and securing their right to vote.

As a reminder, the Northern states had already voted to free their slaves in the years during and immediately following the Revolutionary War.

It is no wonder abolitionist and former slave Frederick Douglass described himself as a “black, dyed in the wool Republican.”

They also populated the ranks of the Ku Klux Klan, formed to terrorize African-Americans and keep them in subjugation.

Lest one think this is ancient history, the nation’s longest-serving senator, Democrat Robert Byrd, led a Ku Klux Klan chapter in his native West Virginia when he was a young man. He went on to serve as the Democrats’ Senate majority and minority leader in the 1970s and ’80s.

One of his claims to fame, more like infamy, is that he filibustered the Civil Rights Act of 1964 for 14 hours, Newsweek reported. That legislation ended the Southern states’ segregation laws.

After Byrd died while still in office in 2010, Biden eulogized the senator, calling him a “friend,” “mentor” and “guide.”

Byrd was repentant later in life about his racist past, and perhaps Biden is now.

However, it’s long past time for him to stop projecting his and his party’s racial hangups on the rest of America. Enough.

The country is not systemically racist.

No nation on this planet has done more to advance the cause of freedom and opportunity for people of all races than the United States of America.