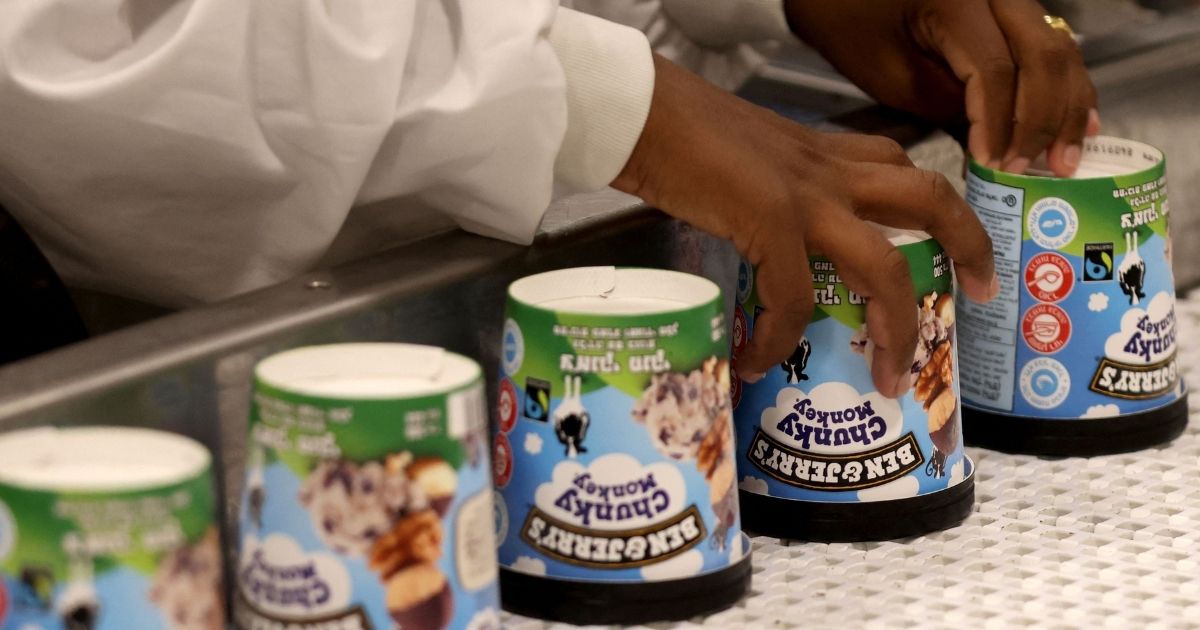 It appears Ben & Jerry’s bid to punish the “occupier” nation of Israel will hurt the very people the company claimed it wanted to help: the Palestinians.

On Monday, Ben & Jerry’s announced it would no longer be selling its products in the West Bank, which it referred to as “Occupied Palestinian Territory.”

“We believe it is inconsistent with our values for Ben & Jerry’s ice cream to be sold in the Occupied Palestinian Territory (OPT). We also hear and recognize the concerns shared with us by our fans and trusted partners,” the company’s statement read in part.

“Although Ben & Jerry’s will no longer be sold in the OPT, we will stay in Israel through a different arrangement. We will share an update on this as soon as we’re ready,” the company added.

Ben & Jerry’s will end sales of our ice cream in the Occupied Palestinian Territory. Read our full statement: https://t.co/2mGWYGN4GA pic.twitter.com/kFeu7aXOf3

Reporter Looks at Group Protesting Police and Then Those There to Support Law Enforcement, Has ‘Surreal' Moment of Realization

Ben & Jerry’s decision will harm Palestinians who work for the distributor of the ice cream in the West Bank, Hen Israeli, the vice president of Sagi Group, told The Jerusalem Post on Wednesday. Sagi Group operates a facility in the industrial area at Mishor Adumim outside of Jerusalem.

“The company employs 10 Palestinians from nearby villages who receive working conditions and salaries they could not earn under the auspices of the Palestinian Authority, according to Israeli, who stressed that the decision would hurt the Palestinian employees if the company’s share of the distribution of the ice cream is lost,” the outlet added.

Here’s the link. To be clear – he isn’t firing them. He’s basically saying he’ll be forced to if the boycott means he can’t distribute to settlements anymore since it’s such a big chunk of his business. https://t.co/xxNPaK2JBR

Charles Mizrahi — editor of Alpha Investor and host of “The Charles Mizrahi Show” — told The Western Journal that Ben & Jerry’s move is illegal and harmful all the way around.

“Not only is Ben and Jerry’s boycott outrageous and blatant anti-Israel, it’s illegal. Israeli law requires the local distributor to sell in all of Israel. The distributor doesn’t have the option to pick and choose where their product is sold,” he said.

“This also hurts the local economy, impacting both Israelis and Palestinians. It’s yet another example of anti-semitic activists pursuing their … hate-filled agenda without any concern about who really is impacted,” Mizrahi added.

As a brief historical review, there never was a country of Palestine. What is currently known as the West Bank was part of Jordan prior to the Six-Day War in 1967.

Before that, it was controlled by the British following the collapse of the Ottoman Empire at the end of World War I.

So to the extent that the West Bank is occupied, it’s because Jordan and its Arab allies lost to Israel in 1967. Such is the nature of war.

Jordan initiated fighting in and around the West Bank and Jerusalem. Israel counterattacked and prevailed, according to History.com.

Do you think Ben & Jerry's has hurt its brand?

Besides the laws of war, Jews do have a solid claim on the land, including Jerusalem, going back to biblical times.

The Jerusalem Post noted that Ben & Jerry’s decision does not mark the first time a company’s targeting of Israel has actually hurt Palestinians.

“Some 500 Palestinian employees lost their jobs at SodaStream after the company moved from Mishor Admumim to a campus at the Idan Negev industrial area after being targeted by the Boycott, Divest and Sanctions movement, although the CEO of the company says the move was due to a need to expand, not pressure by BDS,” the paper reported.

“Some 74 Palestinians were able to continue working at the Negev plant after the move.”

The BDS movement seeks to destroy Israel’s economy by cutting it off from the rest of the world.

Nabil Basherat, a Palestinian who works as a manager at SodaStream, told Israeli news outlet Israel Hayom in 2018, “The global BDS campaign has done the Palestinians more harm ‎than good.”

“The BDS movement threatens my job ‎security and my livelihood. They undercut the livelihood of ‎hundreds of SodaStream employees, who were fired when the ‎company closed its Mishor Adumim factory.‎”

Ben & Jerry’s needs to stick to making ice cream. This whole incident has not only damaged its brand, but it promises to hurt the very Palestinians the company claims to want to help.

Randy DeSoto has written more than 1,000 articles for The Western Journal since he joined the company in 2015. He is a graduate of West Point and Regent University School of Law. He is the author of the book “We Hold These Truths” and screenwriter of the political documentary “I Want Your Money.”

We Hold These Truths