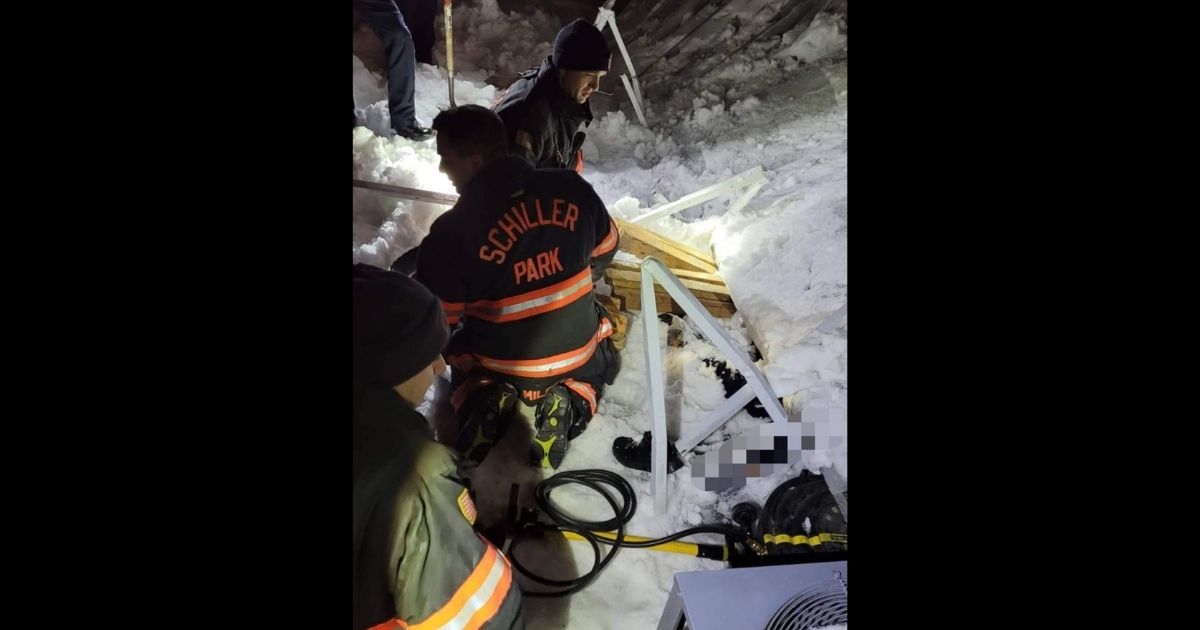 On Monday around noon, a 50-year-old woman was in her backyard, shoveling snow, in the Chicago suburb of Schiller Park, Illinois.

Without any sort of warning, the awning extending from the home came crashing down, pinning her legs and trapping her.

Several feet of ice and snow had been piled up on the awning, causing it to give way.

The woman never lost consciousness and kept yelling for help, but no one heard her.

TRENDING: It’s Now So Bad Even a Clinton Adviser Is Warning About Biden, COVID and a Totalitarian Police State

She stayed there, trapped, her voice muffled by the awning and the snow, until it got dark. Thankfully, a family member arrived around 10:30 p.m., saw her and immediately called for help.

The Schiller Park Fire Department responded and was able to free the woman. Its Facebook page posted about the incident the following day.

“Local 5230 members were called for a female trapped and pinned under an awning since 12 pm ( approximately 10 hours female was pinned outside),” the post read. “Arrival, crew found a large awning covered in snow and ice.

“Schiller Park Police and Fire Department quickly started rescue efforts to remove as much snow and ice from the awning to take some of the weight off her legs.

“Fire Department then placed struts for stability, utilized cribbing and the multi- force air bag system to lift the awning and free the patient. Female was transported to level one trauma center.”

“Great job by both the Schiller Park Police Department and Fire Department!” it said.

“She was trying to call for help, but being her head was inside of the awning, nobody was able to hear her,” he told WLS-TV.

“Most of the snow was on top of the awning, and it did create a bit of a void space under the awning so she was able to still communicate.

“The crews — working with our police department — removed as much snow and ice as they can. We had our truck company use um our stabilizers, which are going to stop the collapse from moving anymore.”

Thankfully this woman was able to escape her terrifying ordeal. It was a mercy that someone found her before it was too late — and even though it was cold out, it wasn’t as cold as the previous week, a fact the Fire Department said made all the difference.

The department wanted to share the story to warn other people of this potential danger, especially because under the weight of ice and snow awnings can collapse with little to no warning.

“Not all collapses give you warning,” Cesaretti told WGN-TV. “So, they — they could happen in an instant.

“So, for a safety message, be aware of what’s over your head in these conditions.”