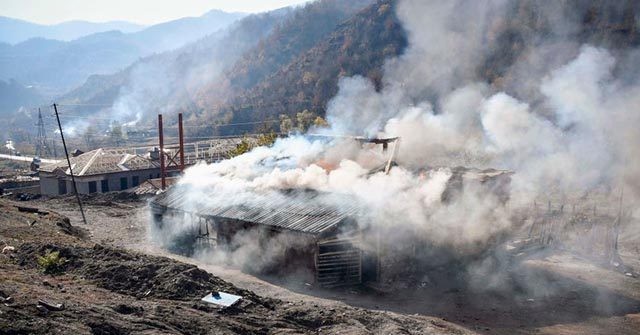 Villagers living in Nagorno-Karabakh burned down their houses before fleeing to Armenia this weekend to prevent Azerbaijan, which will soon control the territory, from using them.

After nearly six weeks of fighting that began in late September, Armenian Prime Minister Nikol Pashinyan agreed to a peace deal that would see Azerbaijan restore its sovereignty over the territory. Nagorno-Karabakh is legally part of Azerbaijan as a relic of Stalin-era Soviet laws, though its population is majority ethnic Armenian. Following the collapse of the Soviet Union, Armenian separatists established control of the territory there, removing the ethnic Azeris who moved in when Joseph Stalin declared the region part of the Azeri Soviet Socialist Republic. The body that governs Nagorno-Karabakh in practice calls itself the Republic of Artsakh, though not even Armenia recognizes it as a sovereign state.

Supporters of the Artsakh government burned at least ten homes down in and around the village of Charektar in deliberate acts of arson to prevent Azeris from moving in.

“This is my house, I can’t leave it to the Turks,” one Armenian told the AP in reference to the Azerbaijanis, who are a Turkic people, and their Turkish allies. “Everybody is going to burn down their house today … We were given until midnight to leave.”

“I built this house from scratch, how can I leave it to anyone?” another resident told the BBC. “We’ve taken whatever we can and now we’re just going to burn it. If my children can’t use this house then no one can.”

Russia, which brokered the ceasefire between the two countries, began deploying around 2,000 troops into the Nagorno-Karabakh on Wednesday as part of the terms of the agreement. This includes the placement of 16 observation posts across the territory in order to guarantee the handover.

The decision by Pashinyan has sparked fury across Armenia, where many consider the deal a capitulation sacrificing part of the Armenian people’s ancestral homeland.

Last week, the imposition of martial law failed to stem the tide of protest as angry citizens stormed the country’s National Assembly and Liberty Square in the capital of Yerevan, calling on the government to resign.

Following the capitulation to #Azerbaijan protests erupt in #Armenia. pic.twitter.com/EfrcxCwfv1

Pashinyan agreed to the deal after the Azeris, reportedly with help from Syrian mercenaries shipped in by Turkey, made significant battleground gains over Armenian forces, including seizing the key strategic town of Shushi.

After signing the deal, Pashinyan described it as “incredibly painful both for me and for our people.” He added that the decision was taken after “deep analyses of the combat situation and in discussion with best experts of the field.”

“This is not a victory but there is not defeat until you consider yourself defeated,” he added. Despite widespread calls for him to resign, he still remains in place as prime minister, with his deputy warning against any kind of “coup” against his government.