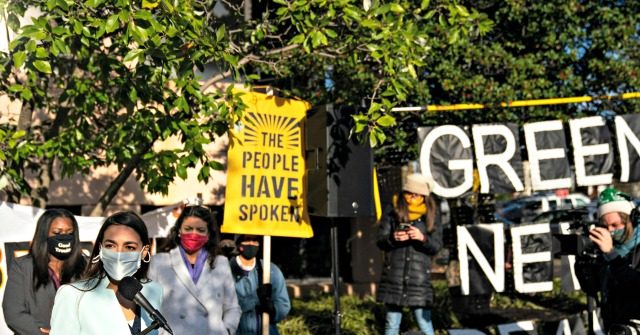 The remarks were made outside of the Democratic National Committee headquarters where activists and members of the media gathered.

“Climate is now a top-three issue for voters across the country and it is about time that our Congress and our administration starts acting like it,” Ocasio-Cortez said as she took the mic. “It’s way past time.”

Ocasio-Cortez later made it clear that a Biden administration better “keep their promise,” should he be elected the 46th President of the United States:

Because you all have done the work, you all got us a seat at the table. We have worked with the Biden administration to secure commitment on a $2 trillion climate plan. Two trillion dollars. But we’re not gonna stop there. We’re not gonna stop with a piece of paper. That’s not what’s gonna happen. We’re not gonna forget about that agreement for the sake of an election, are we? No. What we’re gonna do is that we’re gonna organize and demand that this administration, which I believe is decent and kind and honorable, keep their promise.

So that’s what our next move is, is to make sure that the Biden administration keeps its promise. We know that we don’t just make that demand and walk away. We have to organize for it. We have to bring the heat for it. Because there’s a whole lot of people that tried to just shove a bunch of money before this election to try to buy their seat at the table. But we organized for ours, and we’re not easily going to let that go.

Missouri Congresswoman-elect Cori Bush, a Black Lives Matter activist, also took part in the rally and told those in attendance, “When we don’t act, people who look like me die.”

“What we’re looking at right now, when we crossed the mark for 250,000 people dying at the hands of Trump’s COVID-19? And I am calling it Trump’s COVID-19 because this could have been done differently,” Bush continued.

So we’re looking right now to President-elect Joe Biden to make some changes and do some things that are different. But it’s not good enough to just do different. We gotta do bold. We gotta do change that happens now. We gotta make sure that black folks, brown folks, every marginalized group, our indigenous folks, feel our change. And so that’s why we’re here. We need change that everybody can feel. And so, yes, we’re going to get in good trouble doing it. Yes, we’re going to make sure that we say the names of those that have passed because of failed leadership. And so that’s what we’re asking for right now.

So we’re calling on the Biden administration right now to save lives. Save lives. There’s no other alternative. We need bold leadership and we’re asking you, because we voted for you. Black and brown communities showed up. Ilhan Omar and our sister right here, Rashida Tlaib, showed up, and made sure that people were out, showing up to vote.

“So we’re asking you to show up for us,” Bush concluded. “And we need it now.”

The event was broadcast by Sunrise Movement online and included the hashtag #BidenBeBrave.

BREAKING: @CoriBush, @JamaalBowmanNY, @MondaireJones, @IlhanMN, @RashidaTlaib, @RoKhanna, @AOC, & @EdMarkey are with us at the @DNC demanding a #GreenNewDeal.@JoeBiden must act on his mandate & deliver for those who delivered for him. #BidenBeBravehttps://t.co/V32pkBZD7E

“@JoeBiden must act on his mandate & deliver for those who delivered for him. #BidenBeBrave,” the movement wrote in a tweet.

ABOUT US
Contact us: [email protected]com
© 2021 - Patriots Make History - All Rights Reserved.