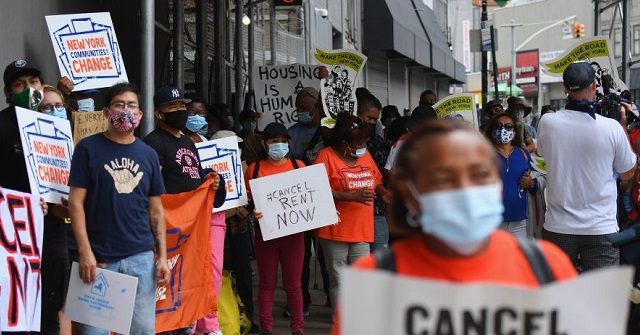 An anti-eviction activist group is promoting a “rent strike” in New York state during the COVID-19 pandemic. The group claims the strikers will “cancel rent” in the state because they “cannot pay,” or are “in solidarity with those who cannot pay.”

The group, Truthout.org, reports there are 57 properties in New York City where tenants are staging a “rent strike.” They claim similar operations are underway in Alexandria, Virginia; Chicago; Gainesville, Florida; Los Angeles; Milwaukee, Wisconsin; Philadelphia and San Francisco.
“While rent strikes are a tried-and-true tactic of the diverse housing justice movement, they are just one tool in a hefty arsenal,” the article states. “Community organizing strategies include occupations of vacant but habitable homes, outdoor encampments, advocacy of legislative relief (including a universal guarantee of homes for all), eviction disruptions, mutual aid, efforts to provide free legal counsel to those facing displacement, and the creation of tiny homes on publicly owned land.”

The article follows the success in Portland, Oregon, where anti-eviction anarchists staged an occupation of a home where police attempted to serve an eviction notice that was ordered long before COVID-19 existed, Breitbart News reported. The anarchists brutally attacked Portland police officers and ran them out of the area.

They set up a multi-block autonomous zone and built warzone-style barricades to keep police at bay.  The barricades finally caved down after Portland Mayor Ted Wheeler surrendered and apologized for attempting to enforce the law.

The Centers for Disease Control and Prevention issued an eviction moratorium in September. The current moratorium is slated to expire at the end of this month.

The New York Times reported in September that the CDC declared “individual renters expecting to make under $99,000 in 2020 are protected until the end of the year if they sign a declaration — under penalty of perjury — that eviction would be likely to leave them homeless or force them to live in close quarters with others.”

A district court in Jackson County, Missouri, issued an order of clarification regarding evictions that allows landlords to proceed with the eviction process if the landlord states the tenant has not signed the required declaration.

Not long after the ruling, an anti-eviction group, @KCTennants, organized a protest where they chained the doors of a Missouri courthouse — locking the occupants inside, Breitbart reported.

Truthout wants to reverse the burden of notification and shift the responsibility from tenants to the courts and landlords, their article states.

The organization is promoting a bill by U.S. Representative Ilhan Omar (D-Minnesota). Her bill, if passed by both houses of Congress and signed by the President of the United States would “eliminate all rent and mortgage payments during the pandemic.” The bill would #CancelRent retroactively to April 1 and extend to 30 days after the ending of the public health emergency. The bill proposes to establish a “Rental Property Relief Fund” to be administered by HUD to cover landlords for their losses. It would also establish a fund to make mortgage holders whole.

“Despite the pandemic, we’ve been doing traditional grassroots organizing to build deeper, broader tenant movements all over the U.S.,” @KCTennants founder and director Tara Raghuveer told Truthout. “Rent strikers and people at risk of losing their shelter are doing all they can to stop the violence of evictions and promote a vision of collective and community ownership of housing for everyone.”

Bob Price serves as associate editor and senior news contributor for the Breitbart Texas-Border team. He is an original member of the Breitbart Texas team. Price is a regular panelist on Fox 26 Houston’s What’s Your Point? Sunday-morning talk show. Follow him on Twitter @BobPriceBBTX and Facebook.

Restaurant Owner Rips Biden’s $15 Minimum Wage Plan, Reveals What It Will Do to Small Businesses