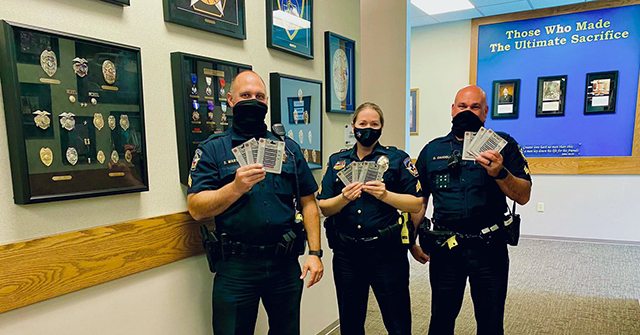 Community members in Travelers Rest, South Carolina, are showing appreciation for their local police officers in a unique way.

Earlier this year, a resident started a program called Adopt-A-Cop so neighbors could sign up to bless an officer with presents and anonymous acts of kindness over a period of six to twelve months, WSPA reported.

“Officers have received an array of kind gifts from their assigned community member such as snacks, gloves, hats and hand written [sic] notes,” the article read.

The program’s Facebook page said its goal is to help community members create positive relationships with the officers and also build trust.

“We randomly get gifts or a gift card or some type of gift of appreciation. We get those from random people in the community. We don’t know who we’re getting them from, and they don’t know which officer they’re giving them to,” said police chief Benjamin Ford.

“It helps us to know and understand that people in the community support us. When we get these gifts it just cheers everyone up,” he added.

“Because of everything going on in the world today, I feel like our officers need to know they’re still loved and supported in our area,” said organizer Brittany Ennis, adding that they are still working to raise $1,600 to hopefully reach their goal.

Police officers in McKinney, Texas, are also feeling loved after an anonymous person dropped off over $400 worth of Chipotle gift cards on Monday at the Public Safety Building, according to the Dallas Morning News.

“The donated gift cards will be given out to police officers during the department’s annual awards picnic in May,” the article read.

The McKinney Police Department shared a photo Tuesday of the officers with the donation:

A huge Thank You to the person who stopped by and anonymously donated more than $400 worth of Chipotle gift cards for our officers! We are very grateful for your selfless act of generosity! What an amazing community🙌#community #thankful #tuesdayvibes pic.twitter.com/iTE2N924tV

“We are very grateful for your selfless act of generosity! What an amazing community,” the post concluded.