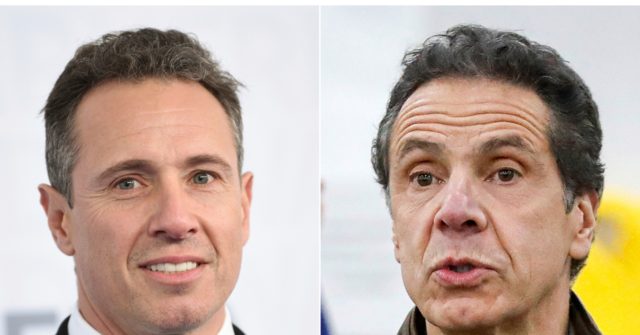 Gov. Andrew Cuomo (D-NY) was hit on Saturday by allegations from a second former aide, who claimed the governor asked her inappropriate questions about her sex life back in June 2020.

However, just one month prior, the “Cuomo Prime Time” host, Chris Cuomo, had his brother on the show as part of a collection of pithy interviews in the early months of the pandemic.

“Do you think you are an attractive person now because you’re single and ready to mingle?” the CNN anchorman asked. “Do you think that you’re some desirable single person and that this is not just people’s pain coming out of them?”

“I think that beauty is in the eye of the beholder,” the governor grinned.

“Listen to you, you got an answer for anything. You’re feeling pretty good about yourself these days, aren’t ya?” the anchor beamed.

BREAKING: Governor #AndrewCuomo is single and ready to mingle. Any takers ?! Via: @cnn @chrisccuomo pic.twitter.com/cvJvCjxEK5

As the sex scandal plagues Gov. Cuomo, along with his nursing home scandal, CNN has barred Chris Cuomo from covering his brother by blood after confessing they lifted the “rule” in the early months of the pandemic for the host to conduct the provocative interviews.

Which swab was it @NYGovCuomo ? pic.twitter.com/ivMUQtHw4g

CNN and America’s three most prominent networks–ABC, NBC, and CBS–have also ignored any mention of sexual harassment claims against Gov. Andrew Cuomo during their evening news programs after the scandal broke. MSNBC also declined to address the scandal.