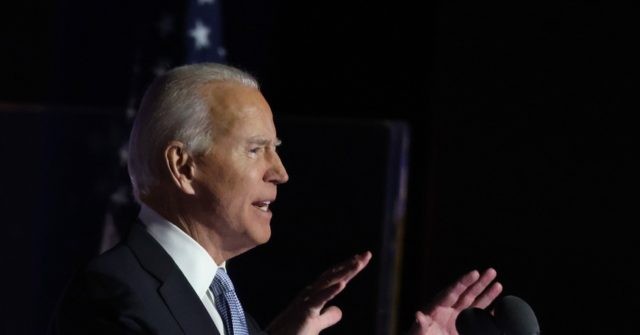 Joe Biden, presumed the winner of the presidential election according to mainstream media networks, issued a call for “unity” Saturday evening after a bruising campaign in which he had compared President Donald Trump to Nazis, including Adolf Hitler.

Biden, who called his campaign a “battle for the soul of our nation,” launched his campaign in April 29 with the false claim that Trump had referred to neo-Nazis as “very fine people.” (Trump in fact said that they should be “condemned totally.”)

When confronted with that fact, Biden continued to insist on his version of events, despite evidence to the contrary.

Biden referred to Trump and his supporters as racists, saying 10 to 15 percent of Americans were “not very good people.”

In the last weeks of his campaign, Biden compared Trump to Nazi propaganda chief Joseph Goebbels, a vicious antisemite who was one of Hitler’s most trusted aides. In late October, his campaign released a video recorded by the Black Eyed Peas that compared Trump to Hitler himself, and implied that his supporters were like Germans who saluted the Nazi regime.

Some of his supporters — attacking effigies of President Trump — seem not to have heeded that message.