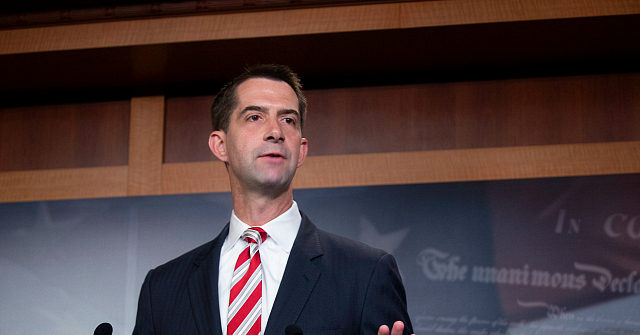 In opening his statement, Cotton stated that those who “attacked the Capitol today should face the full extent of federal law”:

Last summer, as insurrection gripped the streets, I called to send in the troops if necessary to restore order. Today, insurrectionists occupied our Capitol. Fortunately, the Capitol Police and other law-enforcement agencies restored order without the need for federal troops. But the principle remains the same: no quarter for insurrectionists. Those who attacked the Capitol today should face the full extent of federal law.

It’s past time for the president to accept the results of the election, quit misleading the American people, and repudiate mob violence. And the senators and representatives who fanned the flames by encouraging the president and leading their supporters to believe that their objections could reverse the election results should withdraw those objections. In any event, the Congress will complete its constitutional responsibilities tonight.

Earlier Wednesday, as violent demonstrators began their attack on the Capitol, Cotton released a statement condemning the “violence and anarchy” that was taking place.

“Violence and anarchy are unacceptable,” Cotton said on Twitter. “We are a nation of laws. This needs to end now.”

“This violence is unacceptable and needs to be met with the full force of the law,” Cotton wrote in another tweet. “God bless the Capitol Police who are keeping us safe.”

Cotton had previously announced this week that he would not object to the electoral vote as some of his Republican colleagues in the Senate intended to.