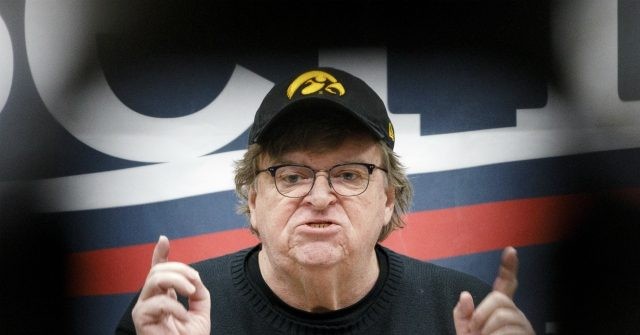 What does documentary filmmaker Michael Moore want in a potential Joe Biden presidency? A radical-left agenda that re-writes parts of the Constitution and cozies up to socialism.

In a letter posted to Facebook, the Oscar-winning director-activist is demanding that Biden renounce centrism and embrace the far-left through a series of concrete steps that include abolishing the Electoral College and pushing through universal health coverage. Moore also urges Biden to pay heed to young Democrats under the age of 35 who have embraced socialism.

“Why risk losing them? We need to listen to and understand why they feel this way,” he said.

Throughout Biden’s presidential campaign, far-left politicians and celebrities have stated that they will try to sway the 77-year-old former vice president toward a more radical agenda if he is elected to the White House. Jane Fonda said that she supports Biden because “you can push him” further left on issues like the environment. Rep. Alexandria Ocasio-Cortez (D-NY) said “we can likely push Vice President Biden in a more progressive direction across policy issues.”

Michael Moore is the latest figure to try to foist a radical progressive agenda on Biden. The Farenheit 9/11 director posted his 2,222-word letter to Facebook on Wednesday, urging Biden to charge into the White House “like FDR on steroids” and avoid the mistakes of President Barack Obama. “He wanted everyone to get along. He was willing to compromise on anything.”

Among Moore’s top demands is the elimination of the Electoral College, which has long been a bogeyman for the left. “You need to sign executive orders and cajole, demand and shame Congress into action. And GO BIG! Eliminate the Electoral College through the National Popular Vote Act! DONE!” the director wrote.

Moore also demanded that Biden create universal health coverage backed by the government. “Health Care is a human right and every American must be covered,” he wrote.

“You MUST create a health system like every other industrial democracy — one backed by the government, not by the whims of the boss where you work or the pandemic that has shut him or her down. This is just plain common sense.”

Perhaps Moore’ most radical demand is for Biden to cozy up to young Democrats who have embraced socialism.

They [centrists] think because Trump got 70 million votes the Democrats should reject Black Lives Matter, AOC, and anything that vaguely sounds like socialism — at a time when the majority of our citizens under the age of 35, according to most polls, prefer the idea of democratic socialism over the greed of modern-day capitalism. Why risk losing them? We need to listen to and understand why they feel this way. They’ve been saddled with crushing student debt and we’ve handed them a planet In the middle of its 6th extinction event as their future. You and Barack introduced them to the benefits of democratic socialism by letting them stay on their parents health insurance until they’re 26! The result: They just set a record by coming out and voting for you in the largest youth numbers ever.

Among his other demands is the ratification of the Equal Rights Amendment and a “living wage” for everyone.

Moore also made a cryptic remark suggesting that anything that helped President Donald Trump get into office must be eliminated.

“We are all eager to join with you [Biden] to repair the damage done to our country,” the filmmaker wrote, “and to eliminate that about our society and our politics which gave us Donald Trump in the first place.”