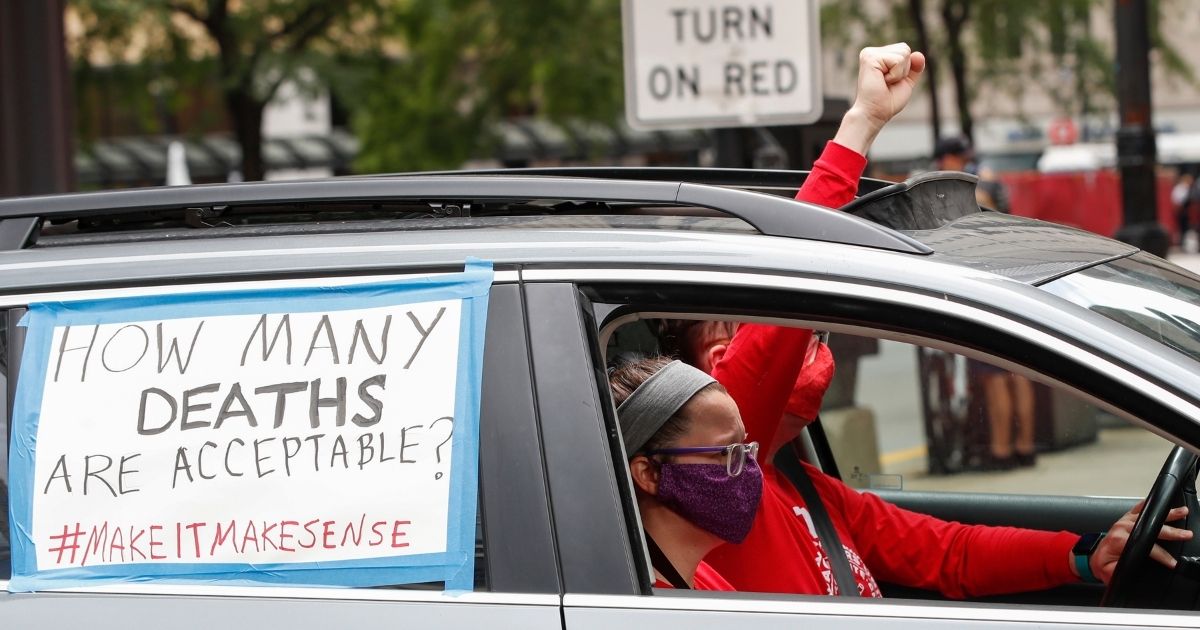 About 40 percent of Chicago Public Schools teachers and staff refused to report for in-person work on Monday, city officials said.

Teachers and staff were expected to return to schools this week for the first time since the coronavirus pandemic began, the Chicago Sun-Times reported.

However, only about half of teachers and three-quarters of support staff — or about 60 percent of the 5,800 employees — returned to the classrooms Monday, according to city officials.

The teachers who did not return and continued to teach remotely were informed that their absence was unexcused and they will face discipline if they continue to defy orders.

“We’re afraid for our lives. We don’t want to lose our jobs. The fear of losing our jobs is real. Many of us are the sole income earners in our homes,” Chicago Public Schools teacher Lori Torres said, according to the Chicago Tribune.

“But the fear of this virus is greater than that fear,” she said.

Students are due to return to school on Jan. 11 for the first in-person classes since March.

Chicago Teachers Union President Jesse Sharkey told reporters that many teachers are concerned and “are not feeling safe at all, are feeling more anxious and scared than ever.”

The union found in a survey that 69 percent of its members reported that conditions in schools were “not adequate,” according to the Sun-Times.

Do you think schools should be reopened?

Sharkey said reopening schools won’t work if “the district simply continues to dictate to us.”

The CTU and Sharkey are calling for making COVID-19 testing widely available, enacting a “clear” mask policy and letting “the vaccinations proceed and then figure out a way to extend school, with a robust summer program or an extended year.”

Troy LaRaviere, president of the Chicago Principals and Administrators Association, said a survey of 300 principals and assistant principals found that only 29 percent felt like they received enough support to make “reopening work successfully.”

This event was not on the mayor’s official schedule and no members of the news media were invited to attend. https://t.co/xnzz0Z7Gfx

RELATED: 2020 Comes to a Close as One of Chicago's Bloodiest in Recent Memory

One parent expressed concern over the spread of COVID-19 in classrooms after her family all tested positive.

“If I had not tested them and our children were in that classroom, they could have spread COVID to other teachers and other students and they would have gone back and hurt someone and I wouldn’t have been able to live with this,” parent Nancy Salgado told the Tribune.

“Our teachers are someone’s moms and dads. They deserve the same rights as us as humans.”

Archdiocese of Chicago schools have been in session since August. At our school there has been no student to student or student to teacher or teacher to student spread.

Although 850 staff members were granted leave or accommodation on Monday, “it is the district’s expectation that teachers without an accommodation report to work tomorrow, just as principals, custodial staff, engineers, and food service staff have throughout the entirety of the pandemic,” CPS spokeswoman Emily Bolton said in a statement.