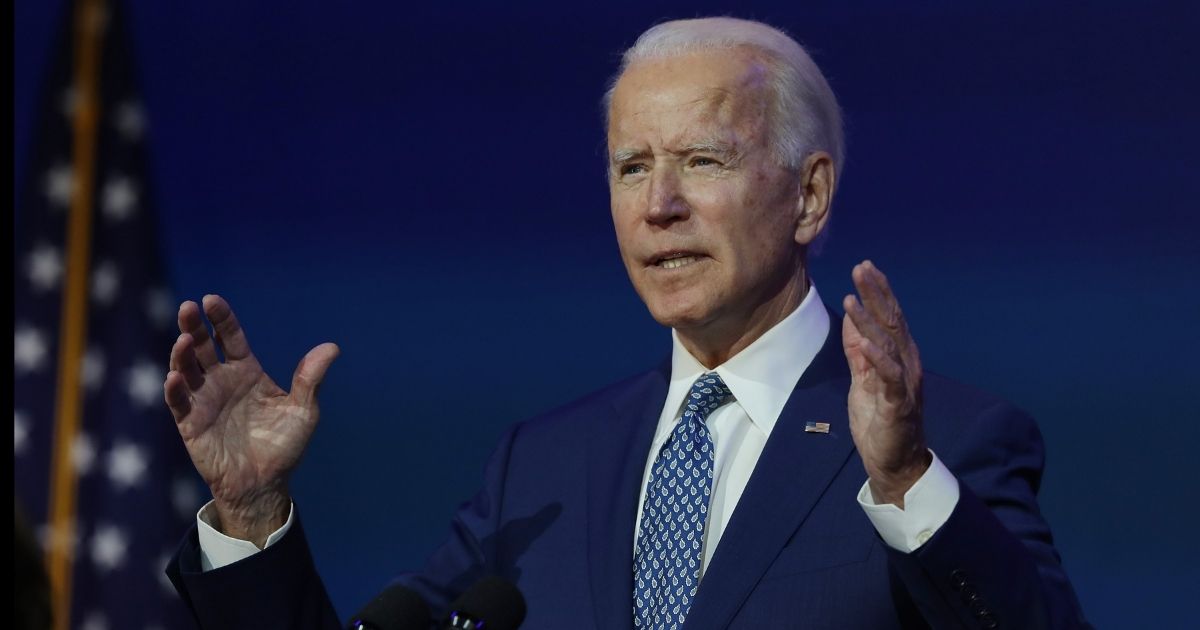 Joe Biden will soon be positioned to fulfill his infamous promise to codify in federal law Roe v. Wade’s spurious right to abortion.

Posing as a faithful Catholic, the presumptive president-elect has long advocated the very un-Catholic dogma that what Roe called “the unwanted child” targeted for abortion has no rights.

In a Biden administration, there will be no reprieve of the death sentence “chosen” by their mothers for these smallest human beings whom the Founders identified and legally protected as “infants stirring in their mothers’ womb.”

Biden comes to this presidency with a refusal to honor one of the most basic Christian values that his Catholic parents and grandparents handed down to him.

He was taught, as all Catholic children were taught, the first principles of natural law: that life is good, and to be supported and favored, and all that threatens it is to be avoided.

Even very young children understand that we may not do harm to any fellow human being, not even that good may come from it.

And indeed all Christian children are taught that we must not harm or kill any innocent human being, no matter how small or disabled or troublesome or unwanted.

Additionally, Joe, as a young American boy, was taught the first principles of law set out in the Declaration of Independence, that we are all created equal and that the right to life is bestowed on each of us by the Creator.

The Founders understood that it is precisely because we are created equal, that we each have an inalienable right to life — both the pregnant mother and “the infant stirring” in her womb.

The Founders recognized that the right to life of these infants as lively members of “our Posterity” was to be protected — that our liberty is not an abusive license to abort our posterity while in utero.

“We the People of the United States, in Order to … secure the Blessings of Liberty to ourselves and our Posterity, do ordain and establish this Constitution for the United States of America.”

Clearly the Constitution is not a selfish document. Our posterity are persons like ourselves; they are not our property.

Surely, the blessings of liberty for our posterity include guaranteeing that our children in the womb are not treated as property. We are mothers and fathers to our children — not their owners.

Ultimately, liberal abortion laws, reclassifying children as their mothers’ “personal” property, and their lethal mistreatment as a “private” matter, reserve the duty to establish justice and to secure the blessings of liberty only to ourselves, and not to ourselves and our posterity as required by the Constitution.

Nevertheless, the Founders’ inclusive right to life remains irrevocably a foundational legal concept in the Constitution.

But where did that legal concept of a right to life originate?

Human Rights Are Founded on “Reason and Natural Law”

Way back in the 16th century, a few good men of religion, three Spanish Dominicans sent to the New World to the island of Hispaniola, declared a new basis for justice — human rights.

These humble missionaries had been offered accommodation in the guest apartments of one of the grand colonial homes. Instead, they made their home among the slaves in one of their small grim huts.

There they saw firsthand the heinous mistreatment by the Spanish conquistadores and the outright killings of so many of those whom they had conquered and now “owned.” Together the three Dominican fathers wrote a famous sermon.

And it was Father Antonio de Montesinos who on the Sunday before Christmas in 1511 delivered it before the Spanish grandees. He challenged the taking of so many vulnerable Indian lives, “deprivation of life before their times.”

“By what right?” he demanded. “Are they not human beings?”

He proclaimed the rights of the Indians and declared these rights to be the same rights as for every other human being on earth.

His rights talk enraged Spaniard slave owners. He was summoned to Spain before the Spanish king and the Council of the Indies, where he valiantly defended the right to life of every Indian, of every human being.

First Use of the Term “Human Rights”

In the meantime, Bartolomé de las Casas — a wealthy young Spaniard with a law degree from the University of Salamanca — rallied to the Dominicans’ side. He gave away his wealth, freed his own Indian slaves and declared the relationship between governments and people to be “a human relationship that respects the human rights of all.”

Las Casas first used the term “human rights” and recognized once and for all that they are founded on “reason and natural law.”

Meanwhile, among other Thomist scholars at Salamanca University, Francis of Vittoria, sometimes called “the father of international law,” began studying this “new doctrine” of human rights and duties.

Out of their intense debates came the confirmation of the principle that all human beings have equal rights just by being human. They recognized that these human rights entail grave obligations for those in authority toward every human being in their power and under their care.

“Nature,” Vittoria declared, “has established a bond of relationship between all human beings.”

Migration of Human Rights from South America to North America

And when in 1776, a motley band of 56 North American colonists produced and signed the Declaration of Independence, this principle of the equal rights of every human being was recognized and cemented right from the beginning into the foundation of the United States of America.

“We hold these truths to be self-evident, that all men are created equal, that they are endowed by their Creator with certain unalienable Rights, that among these are Life, Liberty and the pursuit of Happiness.”

This great principle was recognized at the outset by a moral people honoring the Creator and seeking to uphold the rights and the duties bestowed on them by the Creator.

“And for the support of this Declaration, with a firm reliance on the protection of divine Providence, we mutually pledge to each other our Lives, our Fortunes and our sacred Honor.”

The Founders were ready to sacrifice everything to make this Declaration a reality.

The Declaration’s Rights Were Founded on Natural Law

“Every basic human right,” Pope John XXIII observed, “draws its authoritative force from the natural law, which … attaches to it its respective duty.” Hence, he said, “to claim one’s rights and ignore one’s duties, or only half fulfill them, is like building a house with one hand and tearing it down with the other.”

In an age of unprecedented moral confusion, an extreme feminist ideology has elevated a woman’s self-determination to the false status of an absolute “women’s right.”

We have been persuaded to build with one hand a house called “women’s rights” while the other hand we are tearing it down by abrogating duties, such as the duty to protect and nurture our unborn children and the duty to respect our own bodies, including respect for our natural fertility.

Our autonomy is limited by our duty to protect others, not just ourselves. This should not be a duty imposed from the outside but a duty that springs from the deepest and truest desires of our heart.

It is the heart that recognizes duty. It is love that enables duty. It is loving God, loving each other, loving our neighbors as ourselves, that prepares and equips us to do our duty, even sometimes at the sacrifice of self-interest.

So when Joe Biden tells us he will codify in law a “right” to abortion – a mother’s “right” to commission the killing of “the infant in her womb,” he needs to be challenged with that beautiful old question:

“By what right? Are they not human beings?”

As the presumptive president-elect of these great and good United States of America, let us hope he will reflect on the enduring, unchanging principles and values with which he was raised, and answer that question truthfully.

Will the Tech 'Wokeforce' Be With Us If We Go to...